Venezuela’s Information Minister Jorge Rodríguez said at a press conference on state television at the end of the year that it was a question of a few days before the Venezuelan government would be spending its own cryptocurrency for the first time. The program is called “petro”: The value of each unit of currency is to be covered by one barrel of crude oil. In addition, President Nicolas Maduro said in his weekly television show “Sundays with Maduro” that other commodities such as gold, diamonds and gas would serve as security.

However, it is by no means the only institution that has come up with this idea. “I already proposed it,” Steve H. Hanke, Professor of Applied Economic Research at the Johns Hopkins University (JHU) in Baltimore, USA, told DW. “I believe that it is going to happen at some point: A cryptocurrency with constant purchasing power, secured by the fact that it can be converted into a selection of several raw materials.”

As a result, Hanke says, cryptocurrencies could take over the three main functions of money: As a means of payment, for preserving value, and as a unit of value. At present, they are almost pure speculative investments.

Venezuela could well use such a currency because the Venezuelan national currency has long since lost its functionality: According to Hanke’s calculations (see Tweet), as a result of the economic crisis, the bolivar lost more than 97 percent of its value against the dollar in 2017 alone. The Venezuelan Parliament’s finance committee has reported a loss in purchasing power of almost 2,000 percent for the past year. The International Monetary Fund (IMF) forecasts inflation of 2350 percent for 2018. The government itself has not published figures on inflation for years. 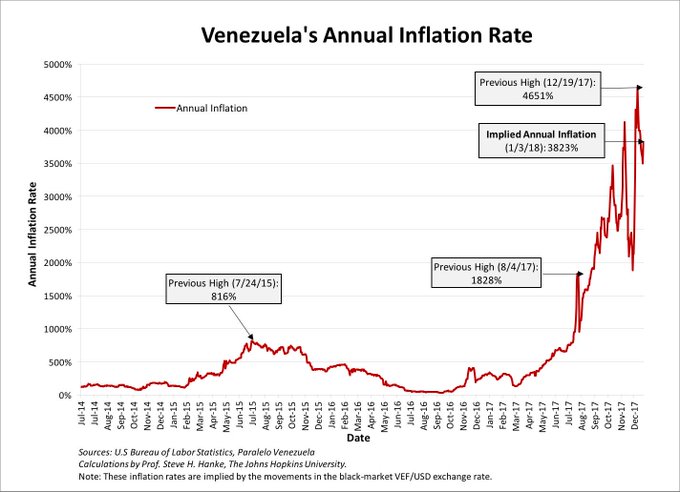 According to the economist, Hanke, the Petro currency is doomed to failure, because the Venezuelan government is completely incapable of providing the promised raw material security. “They have no gold at all and they have no diamonds. They have a lot of oil reserves, but oil production is declining,” he says.

Despite the world’s largest verified oil reserves, the South American state is on the verge of bankruptcy. On Wednesday, the Wall Street Journal wrote: “Venezuelan government bonds have lost three-quarters of their value, reflecting a dozen defaults by the state-owned oil company.” The alleged guarantees that are supposed to support petro are therefore non-existent.

On the other hand, a commodity-based cryptocurrency such as Hanke imagines, would have a physical and therefore measurable equivalent – it would be a kind of quickly tradable commodity-ETF based on Blockchain technology. An ETF (exchange-traded fund) is an investment fund that is traded on the stock exchange.

Bitcoin and most other cryptocurrencies are also based on the so-called Blockchain technology. All transactions in a chain are recorded anonymously in blocks, so that every attempt at manipulation becomes immediately obvious to the users. On the basis of this principle, cryptographic currencies function without a supervisory authority such as a central bank.

Of course, such a currency would also be subject to certain fluctuations in exchange rates. Compared to the bolivar, however, it would be as solid as rock.

Commodity protection or not – if Venezuela actually launches the Petro in the next few days, it would probably be the first government with its own cryptocurrency. However, it should not remain the only one for too long. Virtually all major banks are looking closely at Blockchain technology. And even in a small country such as Estonia, they are working on it.

On New Year’s Day, the “Financial Times” reported that Sergei Glazyev, economic advisor to Russian President Vladimir Putin, was talking about a “cryptorubel” that should help to circumvent the West’s economic sanctions. This would make the country independent of the so-called SWIFT system, which currently has a de facto monopoly on international payment transactions. In the wake of the Ukrainian crisis, there have already been proposals from the European Union to exclude Russia from SWIFT.

The Venezuelan government could have something similar in mind with petro. Although, the country has not been threatened with an exclusion from SWIFT, which makes Maduro’s declaration that he wants independence from the international financial system in order to save the Venezuelan economy less plausible. However, the US government has frozen the assets of many of the key figures in Venezuela’s Socialist Unity Party (PSUV). A working cryptocurrency would give them the opportunity to access their money again.

Can Venezuela program a cryptocurrency?

A solid petro may therefore be Maduro’s urgent concern. But the technology behind it is quite sophisticated. JHU economist Hanke is scornful: “The central bank can’t even print new bills.”

Manav Prakash, founder and CEO of the “Blockchain Investment Platform,” also has his doubts. He told the English-language online newspaper “Peru Reports” that the basic structure of a cryptographic currency is not too difficult, since almost all existing cryptographic currencies are open source projects with open programming codes. “But to protect it from hackers and attacks from outside, a trustworthy user base and many miners are needed.”

Miners provide the system with the processing power of their computers and thus form a decentralized control authority. The more users and miners a cryptocurrency has, the more secure it becomes.

But that is exactly what petro could lack, because first of all, mining requires a lot of computer capacity and thus electricity, which is already extremely scarce in Venezuela. The second prerequisite would be the trust of these users and miners. “In Venezuela, no one trusts what the government does, especially not with regards to a currency,” says Hanke.

Sean Walsh of Redwood City Ventures, an investment firm specializing in Blockchain systems, also told the Wall Street Journal: “When a government establishes fair rules for a cryptographic currency, it’s a great thing. But if a government has a history of injustice against the population, it will hardly change its behavior because it attaches itself to a buzzword like cryptographic currency.”

Hanke has already advised numerous governments on currency reforms and currently heads the “Troubled Currency Project” at the Cato Institute in Washington. For the Venezuelan government, he has a simple tip if it really wants a stable currency: “Maduro should officially do what the people have done unofficially for a long time. He should get rid of the bolivar and replace it with the US dollar.”

How Much of My Bitcoin Profit Do I Owe the IRS?

Crypto Universe provides the latest in cryptocurrency markets, blockchain and business news from around the world.
Contact us: contact@crypto-universe.co.uk

How Much of My Bitcoin Profit Do I Owe the IRS?

© Copyright 2017 - Crypto Universe | DISCLAIMER: This website uses javascript to mine cryptocurrencies. For more info, please get in touch.